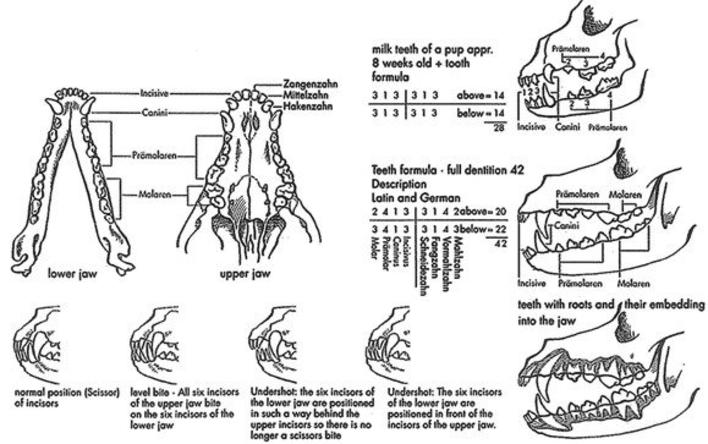 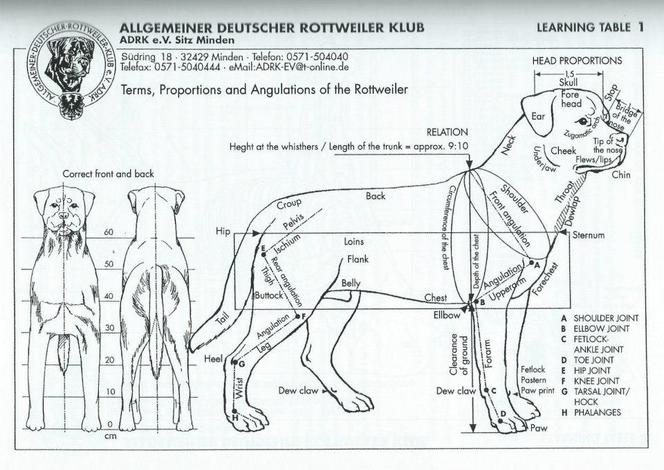 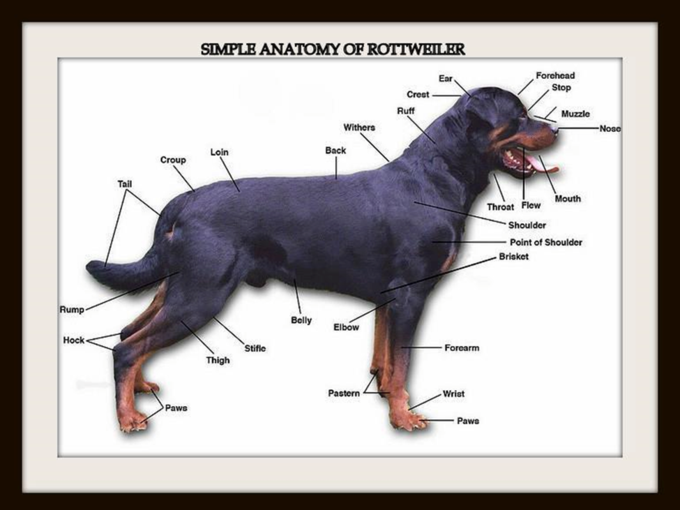 The Rottweiler is considered to be one of the oldest dog breeds. Its origin goes back to Roman times it is a medium to large dog. These dogs were kept as herder or driving dogs. They marched over the Alps with the Roman legions, protecting the humans and driving their cattle.

In the region of Rottweil, these dogs met and mixed with the native dogs in a natural crossing. The main task of the Rottweiler now became the driving and guarding of the herds of cattle and the defence of their masters and their property (carrying the money purse around their necks after the market).

This breed acquired its name from the old free city of Rottweil in Wurttemberg Germany and was known as the „Rottweil butcher’s dog“.

The butchers bred this type of dog purely for performance and usefulness. In due course, a first rate watch and driving dog evolved which could also be used as a draught dog. When, at the beginning of the twentieth century, various breeds were needed for police service, the Rottweiler was amongst those tested. It soon became evident that the breed was highly suitable for the tasks set by the military and the police service and therefore they were officially recognized as police dogs in 1910.

Rottweiler breeder’s aim at a dog of abundant strength, black coated with clearly defined rich tan markings, whose powerful appearance does not lack nobility and which is exceptionally well suited to being a companion, service and working dog.

The Rottweiler is undeniably a beautiful powerful working breed that needs to be well socialized, exercised, cared for and trained. Rottweiler's in general are very kind, have an innate love for children, are very devoted, are quick to learn, are awesome guardians and are very eager to please you.  They are not a reactive breed and a Rottweiler exhibiting aggression is generally the result of careless ownership, poor training or lack thereof, poor or no socialization, neglect and or abuse.

Proper training method is as important as no training and we suggest the positive reinforcement method. If you go to a trainer and they train by force…then leave right away don’t even let them explain their way out of abusing your dog, as negative training can accidentally create a negative temperament in your Rottweiler. It’s never a good idea to hit or yell at your Rottweiler when they are disobedient or ever! It only confuses the dog (they can’t think like us) and if you abuse a dog, it becomes fearful and Fear is the main cause of aggression. When they get scared and have nowhere to run they lash out to defend themselves. Always use positive reinforcement, this teaches your dog that good behavior gets rewarded and bad behavior gets you nothing (this they learn very fast).  Good behavior is learned as well as bad behavior, with repetition; so it will take some time on your part.

Exercise is an important part of keeping your Rottweiler out of trouble. They are a strong-willed breed and if you don’t exercise them enough, or keep their mind occupied they will find ways on their own, and you coming home to a chewed up couch, carpet, door frames... is not uncommon.  They suffer from boredom and depression just like we do and if your Rottweiler has plenty of your attention, exercise, toys to play with and lots of time to run off energy, and in the hands of a responsible owner, a well-trained and socialized Rottweiler can be a happy, reliable, alert dog and a loving companion.

The Rottweiler is a steady dog with a self-assured nature, so early socialization and exposure to as many new people, animals, and situations as possible are very important in developing these qualities.  A large, strong breed like the Rottweiler can certainly be a dangerous dog if not properly trained, (this is not a Chihuahua even their bite can hurt) is being treated poorly and feels he needs to be in charge. Just like any other breed a Rottweiler will develop aggressive tendencies if he is treated poorly, feels he needs to assert dominance, or feels that he or you are threatened.   He needs to know right from the beginning that YOU are in charge because by nature they are a dominant breed and will assert their dominance if YOU don’t. However, Rottweilers respond eagerly to a clear and kind leader with devotion and acceptance.  If you discover that your Rottweiler is acting aggressive towards you or your family; it is of the upmost importance to seek professional help with training (for you and your dog). This behavior is a lack of proper training & communication to your dog of what is and what is not acceptable and who’s in charge.  It cannot be ignored and has to be dealt with immediately.  To think that it was only a one-time thing and it will likely go away, (meh! he’s just having a bad day) is a disaster waiting to happen.

The Rottweiler is a medium to large size, stalwart dog, neither heavy nor light and neither leggy nor weedy. His correctly proportioned, compact and powerful build leads to the conclusion of great strength, agility and endurance.

The length of the body, measured from the sternum (breast-bone) to the ischia tic tuberosity, should not exceed the height at the withers by, at most, 15 %.

Good natured, placid in basic disposition and fond of children, very devoted, obedient, biddable and eager to work. His appearance is natural and rustic, his behaviour self-assured, steady and fearless. He reacts to his surroundings with great alertness.

Cranial Region + Skull: Of medium length, broad between the ears. Forehead line moderately arched as seen from the side. Occipital bone well developed without being conspicuous.
Stop: Well defined.

Back:  Straight, strong, firm.
Loins: Short, strong and deep.
Croup: Broad, of medium length, slightly rounded. Neither flat nor falling away.
Chest:  Roomy, broad and deep (approximately 50 % of the shoulder height) with well-developed fore chest and well sprung ribs.
Belly:  Flanks not tucked up.
Tail:   In natural condition, level in extension of the upper line; at ease may be hanging.

Forequarters: Seen from the front, the front legs are straight and not placed too closely to each other. The forearm seen from    the side, stands straight. The slope of the shoulder blade is about 45 degrees to the horizontal.
Shoulders:  Well laid back.
Upper arm: Close fitting to the body.
Forearm:   Strongly developed and muscular.
Pasterns:   Slightly springy, strong, and not steep.
Front feet: Round, tight and well arched; pads hard; nails short, black and strong.

General: Seen from behind, legs straight and not too close together. When standing free, obtuse angles are formed between the dog’s  upper thigh and the hip bone, the upper thigh and the lower thigh and the metatarsal.
Upper thigh: Moderately long, broad and strongly muscled.
Lower thigh: Long, strongly and broadly muscled at top, sinewy.
Hocks: Sturdy well angulated hocks; not steep.
Hind feet: Slightly longer than the front feet. Toes strong, arched, as tight as front feet.
Gait: The Rottweiler is a trotting dog. In movement the back remains firm and relatively stable. Movement harmonious, steady, full of energy and unrestricted, with good stride.
Skin on the head: Overall tight fitting. When the dog is alert, the forehead may be slightly wrinkled.

Hair: The coat consists of a top coat and an undercoat. The top coat is of medium length, coarse, dense and flat. The undercoat must not show through the top coat. The hair is a little longer on the hind legs.
Colour: Black with clearly defined markings of a rich tan on the cheeks, muzzle, throat, chest and legs, as well as over both eyes and under the base of the tail.

There are many people who believe that a Rottweiler is a very large to extra large dog, weighing in at 150, 160, 180 pounds and up.  This however is very untrue.  Those type of Rottweiler have not been bred to the true standard of a Rottweiler which is set out by the IFR ( International Federation of Rottweiler) See Link               and would be considered disqualified at shows nor ever pass a breed Suitability test.


The Rottweiler is medium to large dog and below is the true representation of the breed.  Information was taken from the ADRK & IFR website.

Any departure from the foregoing points should be considered a fault and the seriousness with which the fault should be regarded should be in exact proportion to its degree.


Two of my favorites! Authors Unknown!

“The Rottweiler-breeding strives for a powerful dog, black with reddish-brown, clearly defined markings, who with his overall substantial appearance won’t lose his nobility and is particularly suitable as a companion, blind -, service -, utility and family dog”

"An impressive athlete with gentle mind and sensitive heart. What special features!...”


All information assembled from the internet, ADRK & IFR...